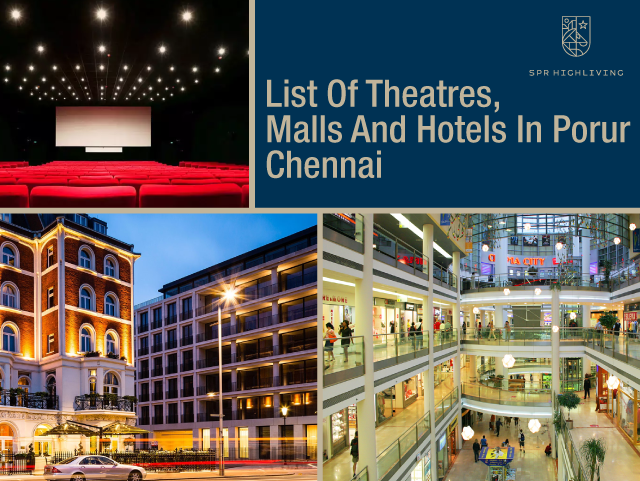 List of theatres, malls and hotels in Porur, Chennai

Chennai has many neighboring cities that are developing fast in the recent past. One such city is Porur. A great number of people that are settled and are planning to settle in Chennai are now moving towards Porur due to its expansion as it connects major areas of the city. Not only in real estate but it is also seeing a surge in IT hub. The companies that have offices in Chennai are moving to Porur constructing better offices in the vast space that is available. Proximity to the Porur lake is a blessing to people residing there as they face a very minimal shortage of water. If water management is done diligently, then Porur will not see any water issues at all. Such is the advantage of this place.

Besides, the booming real estate is paving the way to a large number of luxury apartments. The availability of acres of land for commercial and industrial purposes is helping Porur expand quicker. As people move to a new location and settle down, the area’s demand increases and this opens opportunities to new businesses. Malls, hotels, movie spaces, jobs, and other attractions tend to take shape. There’s enough talk about the IT hub and real estate. Let’s see the various entertaining spots that are present in and around Porur which attracts the crowd.

Here is the list of Hotel, Mall theatres in Porur, Chennai

Hotels are commercial establishments that provide different services like lodging, meals and other amenities. Hotels have always been a family’s favorite hangout spot. Hotels range from two stars to five stars depending upon the luxury amenities available with them. Food is a never-dying business and none step back from investing in it. Hotels generate huge income in a society as it is one of the very basic amenities of a human.

Grand Residence which is one of the best hotels for solo travelers, which has all kind of amenities like swimming pool and other luxury things too. It is a perfect place for resting during the weekends. It’s a 30-minute drive from the airport and railway station.

OYO Flagship 24027 Porur has one of the best amenities in town for a quick hassle-free journey and is mainly for different travelers across the town who are looking for a good time. It also has breakfast included which makes it ideal too.

Sri Lakshmi Lodge which is situated in Poonamalle high road is at a distance of 0.4 km from Porur bus stop and is the ideal place for staying because of its convenience and availability of transport and is also very near to Airports

Remisha service Apartments have the best homemade food available which is the best for people looking for some homely exposure and its also a 2-star property too. its also nearer to different temples if you are a traveling pilgrim and also has in-hotel medical services which can be availed by the customers

ITC GRAND CHOLA which is located in Guindy neighborhood defines luxury with all high-end amenities and luxury living with the best pay for money. The tall mahal makes it look like a King’s own palace and has Airport nearer to it. It also serves the best and quality food too.

Park Hyatt Chennai is an epitome of luxury which is nearer to Kapaleeswarar temple and Fort St George. It is also near to malls and airports making it one of the best places to cool off. They also have various different amenities that help in a comfortable stay

Taj Coromandel is a 5-star hotel, located near Porur and is one of the neighbors of Nungabakkam. It’s also near to temples and has all means of transport available at a short span of distance. It is also connected to convection center

The Park Chennai is located in Royapettah neighborhood and has adjoining malls too. This property participates with nature has a good social cause behind it. Express Avenue is nearer to this place if you want to spend your time in a mall

One thing that has taken up a huge surge in the recent past is malls. Malls are commercial spaces that hold numerous outlets of various brands. A typical mall has a number of stores along with one dedicated floor for the food court and play area for kids along with a few movie screens. Chennai has countless malls.

EA or Express Avenue mall is the central mall which is a household name in Chennai, it has a lot of entertaining amenities and also has a variety of shopping malls situated in it. It’ has everything to offer, from gifts and handicrafts to different food outlets. It’s a short drive from Porur

PHOENIX Market city is situated in Velachery and is very close to Porur, nearly 9 km and is part of Phoenix group. It is one of the biggest malls in Asia and is spread across 1 million square feet. It has multiplex theatres and many more world-class amenities.

Forum Vijaya mall is nearly 6 km away from Porur and is part of the Prestige groups. Its located in Koramangala and is densely populated. It has also won awards for being the best mall.

VR mall is nearly 6 km away from Porur and is in close proximity to near Metro zone. This mall also offers a variety of different amenities and also has fun zones were kids can hang out at a different time

Spencer Plaza complex is nearly 12 km away from Porur is the oldest standing shopping mall ever, they have been attracting Chennai people for years now with their outstanding services and variety of products. They offer the best food services too.

Most people’s favorite pastime is watching movies. Watching movies on the big screen has its perks. The aroma of popcorn, those sound effects and seeing your hero on that big screen is all that you crave for when a new movie is released. Even kids these days want to watch all their Disney movies on the big screen. Every prominent area has got it a minimum of one theatre. With a growing population and demand, there are more theatres opening.

AGS cinemas which is located nearly 2 km away from Porur is one of the best cinema theatres. It’s a cinema hub for all movie lovers and also has the best screens for better movie experiences

Palazzo cinemas which are situated in forum mall offers the best cinema viewing experience and has comfortable cushiony seats for maximum comfort, it is situated in Vadapalani and nearly 3 km away from Porur

Shri Bhagavati Cinema hall is located in kovil street and is approximately 5 km from Porur and is also a recognized cinema theatre. It also provides good quality amenities and is a huge cinema theatre.

Bakialakshmi talkies are situated near Anbu Nagar, Alwarthirunagar and also have world-class cinema experience with widescreen and spacious seats for better viewing.

Porur being one of the promising places near Chennai has so many new amenities to explore and is a fast-growing city too. Porur Lake isn’t the only highlight of Porur but much more. Its connection with Chennai gives it an edge over other cities and makes it more explorable. Indulge yourself and be exposed to new experiences!

Feel free to give us your suggestions and feedback on what have we missed with Porur and what all needs to be added.

It is the best site I have ever visited about