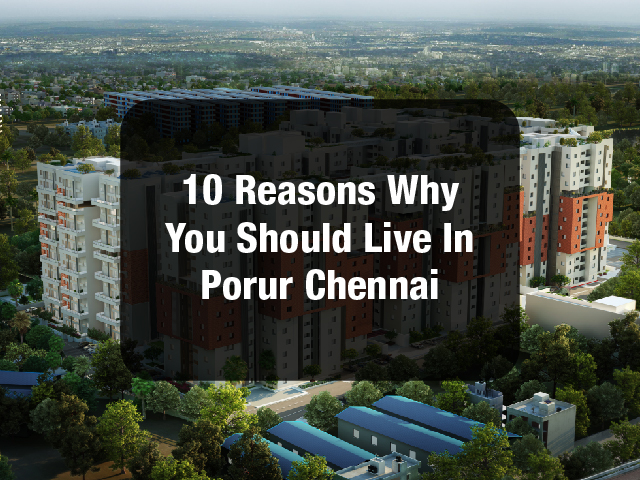 10 Reasons Why you should live in Porur Chennai

Porur is a part of Chennai, located on the outskirts of the city. The amount of population moving to this part of the city has various reasons. Industries and IT hubs are multiplying that are making this place an ideal location for job seekers to settle down. Besides, it has also got one of the city’s biggest lakes – the Porur lake which holds an abundance of fresh water. This is also one of the reasons for many industries to land here.

Let’s find out, Why is Porur becoming the heart of Chennai

Porur is a central hub for different industries, specifically chemical industries like “micro chem”, apart from the chemical industries. Most enterprises rely on water bodies for functioning, and Porur lake helps industries in this. Besides, numerous vegetable markets provide fresh veggies and fruits. Porur being close to Koyambedu has the advantage of transporting tons of veggies and fruits directly from the farmers’ market. It also has the ‘Koyambedu Wholesale Supermarket Complex’ (KWMC), which is one of the largest wholesale supermarkets in the city.

Porur has intricate bus routes that can help you reach any corner of the city. Also, numerous small bus services take you to the interiors of the place. A new electric train line from St.Thomas Mount to Porur is under the proposal and will take shape soon. This will make commutation much easier. CMRL has also proposed a new track towards Porur that will make life easier for the working class.

Being one of the IT hubs, it houses people from different parts of the country. Besides, there is also a cultural touch to the place – it has many religious sites.

Here’s a list of temples and churches in Porur :

Check out the link here for further details on these temples – list of temples in Porur, chennai

As mentioned earlier, Porur has the city’s one of the biggest lakes. This is a freshwater reservoir and addresses a lot of water shortage issues. The recent rains have replenished the lake with gallons of water that are channeled for domestic use. The soil around the lake can suck and replenish its groundwater table that recharges the groundwater. Careful and proper usage of water in this area will prove to be very promising for the Summer.

Porur sees rapid growth in the number of IT industries. The DLF IT hub has many MNCs. This provides wide employment opportunities. Working in these big firms gives a promising career and a good income as well.

Here’s a list of the big corporate firms that they house:

Along with other corporates that amount to a total of 28 companies in the IT Park. Given the popularity of this place and the number of working-class people, there might also be other new emerging companies.

With a growing population, Porur also sees fast growth in residential spaces. Along with the usual constructions, advancement in Luxury houses is also on the go. More people are preferring and moving to luxury homes. SPR Highliving, Elite Homes, Casagranda are some of the places you can trust and invest in.

It has one of the most prestigious colleges in the city – Sri Ramachandra Medical College. It also has other famous schools.

These schools offer a better education to budding students.

Porur connects to NH45 and NH47 that offers good routes to various adjacent states. This also channels a free flow of traffic and easy mobility to places.

The Porur flyover provides the easiest and fastest commute to the city. The flyover eases the traffic and keeps the vehicles from halting at one junction. It is also expected that there will be plans for advancements in infrastructure.

Being one of the fast-growing places in Chennai, Porur currently has affordable prices for the land and residential spaces. Consider Porur, if you would like to invest this will promise higher property returns.

Above all, Porur is a developing place, and so the opportunities are vast. The amenities and resources available provide a comfortable and convenient lifestyle. It is an ideal place for everyone who is looking to settle down in a moderately crowded area. Every location has got its shortcomings. However, seeing a bigger picture and things on a brighter side gives you a better insight to move into a new place. Are you planning to settle in Porur? Tell us why in the comments section below.