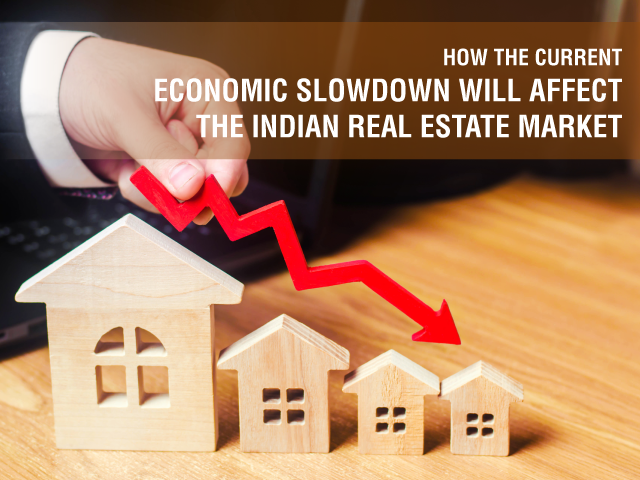 The current economic slowdown has had an impact on the nation’s consumption habits. This, in turn, has taken its toll on the Indian real estate sector. With the slowdown affecting consumption across various industries, the real estate sector has been experiencing challenges from other factors as well, making it susceptible to unprecedented hassles.

There’s no doubt that the real estate sector is going through a bad phase in recent times. The nation’s real estate scenario is rife with a large number of unsold units as well as unfinished projects. The numbers seem to rise with time.

Unlike the period of 2006-2010, when there was massive investment activity, the phase of 2017-2019 has been sluggish. A survey conducted by independent real estate research institutes reveals that as of March 2019, the top 30 cities in India had about 1.28 million unsold housing units. There has been a jump of 7% from 1.20 million, during March 2018.

The two major parts of the real estate market, namely, residential and commercial sectors, are known to behave differently. The market for commercial space is performing relatively better due to falling vacancies and strong rentals. Steady funding from institutional investors is also seen to support the growth in this segment. In spite of the overall slowdown, demand for retail space has been healthy. The commercial market remains the only performing sub-sector in today’s real estate market.

On the other hand, residential real estate has been sluggish due to several factors, such as unattractive RoI, the anticipation of significant price correction, stagnant job market, among other reasons. With the economic slowdown, awareness of other lucrative investment options has been on the rise. Investors have started exploring these, often finding them to be more rewarding.  Even lenders are seen to exercise caution in financing consumer-driven sectors, especially the real estate sector.

With several challenges thrown by the economic slowdown, homebuyers are exercising caution. They adopt the wait-and-watch approach. Buying a home is a once-in-a-lifetime venture for most of the consumers. Usually, people take about a month to make their purchase decision. According to developers, this waiting period has gone up to three months. The skepticism and caution associated with the sector is the causal factor.

The Root Cause of the Sluggish Real Estate Market

The overall economic slowdown in the country has triggered widespread anxiety over job security, and this has had a cascading effect on India’s real estate sector. The Indian real estate market comprises four subsectors, namely, housing, commercial, retail, and hospitality.

These sectors are interconnected. Their growth depends on the growth of the corporate setting as well as the demand for residential projects and office spaces. Owing to the slowdown in other sectors, the real estate market is also receding thanks to various internal and external factors.

The Reasons for Stagnation

Industry experts attribute the downturn to several factors. These include unattractive RoI, buyers’ distrust of incomplete projects, poor loan-to-value ratio, and lack of momentum related to employment generation. The backlash from demonetization and high taxes on under-construction homes also contribute to the current stagnancy, driving investors to look for other asset classes.

The Indian government, wanting to boost the inactive market, has been taking a series of steps. The interest rate has been reduced. GST has been decreased from 12% to 5% on under-construction properties while for affordable housing, it has been reduced from 8% to 1%. The efforts towards ample job creation and the attempts to enhance GDP are expected to bring in the much-needed positive changes to the market soon.

Residential Real Estate – The Way Ahead

The buyers’ capabilities to sustain long-term EMIs and down payments are expected to increase in the future – especially when the job security factor improves. This will translate into home seekers opting for buying rather than renting, thus putting the residential real estate market back on the map.

Homes will have to become affordable in terms of prices as well as the taxes that come with it. With return on investment and trust in developers with under-construction projects hopefully increasing, the real estate scenario can see a positive change shortly.

Despite the current slowdown, the Indian real estate market is likely to touch the USD 180 billion mark by 2020. Commercial, retail, and hospitality sectors will be the driving factors. As for the housing sector, which contributes to roughly 6% of the nation’s gross GDP, it is expected to attract increased foreign direct investment.

The initiatives taken by the central and state governments will encourage development in this sector. The Smart Cities Project, the introduction of REIT, and schemes such as housing for all and affordable housing will bode well for the real estate ecosystem.

The phase in which individual income increases rapidly in a fast economy has passed. During that period, several home buyers upgraded from mid-segment to high-end ones, triggering a cycle of new purchases and resale of homes. However, when the economy started to consolidate, the demand for an upper-end residential inventory that involves high capital values have nosedived. This will change when the economic cycle changes.

Although buyer sentiments appear to be a little weak at present, the various steps are taken, and incentives offered by the government are likely to bring about a positive change. Factors such as home loan interest rate reduction and better job opportunities will enable the real estate market to rebound.