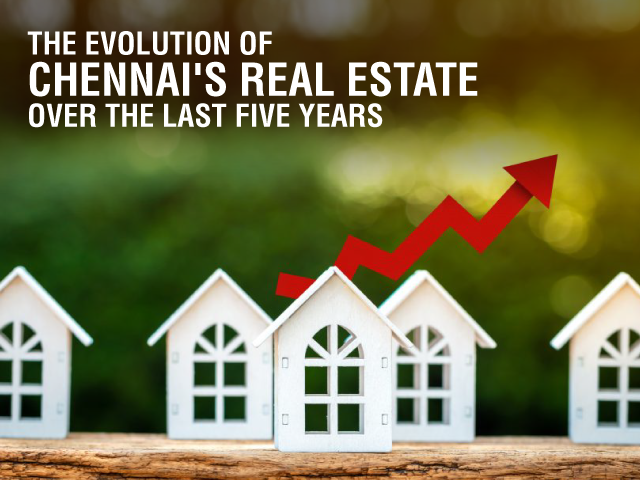 Quite a lot of activity and several rapid developments have been witnessed in Chennai’s real estate market during the past few years. Notably, the last five years have been historic from several perspectives, more so in the residential real estate domain. The market has faced quite a lot of ups and downs literally during the last decade.

Stagnancy caused by certain inevitable reasons such as political turmoil, the catastrophic floods, and unprecedented regulatory reforms has rendered the market clueless. But factors such as developers’ increased focus on project completion and reasonable and practically feasible home loans have ensured that buyers’ confidence level ascended, taking the sentiment toward the positive side.

In line with the optimistic sentiments about the prospects of the real estate sector across the top-metro cities in India, Chennai has been seen to make signs of a steady recovery. The history of real estate in Chennai has always been checkered with fluctuations.

During the last few years, the real estate market in Chennai has been taking big strides toward total recovery, signaling future growth. These positive trends are expected to continue throughout the year, extending to the next year as well.

The slump in India’s real estate has been continuing despite the efforts taken by the finance ministry to revive the sector. Contrary to this, there has been resilience in the property markets of the South Indian metro cities, especially Chennai. Chennai has undoubtedly bucked the national trend robustly. The report from a study stating that Chennai has logged a 20% increase in the sales of residential properties in the first half of the current year is proof of this trend.

Factors contributing to the positive trend in real estate in Chennai

During the past two years, Chennai’s real estate market has undergone a positive transformation. The government’s emphasis on enhancing the transport infrastructure and building an integrated network of connectivity in Chennai, the successful launch of the metro rail, rapid developments in the outskirts and suburbs have helped the sentiments. These have restored the confidence of investors and homebuyers in Chennai city.

How has Chennai evolved during the past few years?

The Way Real estate market in Chennai has been progressing

Real estate developers, since the last few years, have started implementing new strategies such as offering more amenities, reducing delivery timelines, and various other attractive offers for homebuyers from varied segments. This has consequently led to accelerated sales of apartment sales in Chennai.

Chennai’s city limits have witnessed expansion during a few years back, encouraging end consumers to explore the city’s suburban pockets for residential properties. The government also, by deploying several measures to establish a robust infrastructure for those areas, has facilitated the smooth spreading of the city’s localities and their access.

The mass rapid transit system is about to be connected to the metro rail network. Such a model has ensured enhanced connectivity for the city’s commuters. The improvement in the social and civic infrastructure has increased the opportunities of the real estate sector. This is one of the reasons why this sector has been prospering in Chennai during the last few years.

Following the general stagnancy experienced in the Indian real estate market, Chennai has witnessed a brilliant revival during the year 2017. Chennai’s residential real estate market has been dominated mainly by the below-50 Lakh category. The demand for affordable homes has been picking up in Chennai, along with mid-premium condominiums.

It is primarily an end-user driven residential real estate market, Chennai witnesses increased demand for apartments located in well-connected areas and neighborhoods with basic amenities and fast-growing infrastructure. These factors have remained the primary preference of homebuyers in Chennai. Localities that offer promising employment generation opportunities have been in demand. The more affluent segment is also consuming luxury flats in Chennai.

During the past five years, homebuyers have been drawn toward residential units that are priced below Rs.30 lakhs and still manage to provide all the necessary amenities required for the modern lifestyle. Research has shown that nearly 65% of the new launches during the past two years in the city were below Rs.50 lakh mark.

The year 2018 has witnessed residential properties priced in this range garnering the maximum attention among the young homebuyers. Developers, sensing the demand for this segment, have started developing affordable homes and market them as utility homes having all luxuries for the consumers. No wonder this has turned out to be the fast-moving segment in Chennai real estate market.

Overall economic conditions are improving. RERA and its nuances are staunchly in place. These bode well for residential investments; they are expected to improve in Chennai. The increasing interest in affordable and mid-range housing segment drives the revival of the demand and supply of residential properties in the city.