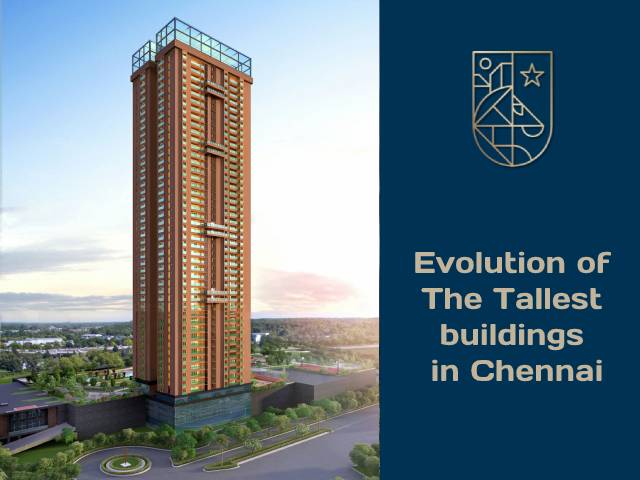 Evolution of Tallest buildings in Chennai

What do we ‘awe’ about Dubai and Singapore? Tall buildings? Yes! It is a city’s pride – for it makes it stand tall and high. Skyscrapers have always been a symbol of modernization. It represents the growth of a town. Skyscrapers symbolize the advancement in the technology of Engineering. Chennai had seen an increase in trends for Skyscrapers right from when western construction practices came to India.

Skyscrapers are also one of the reasons behind how Madras became Chennai.

Back when Chennai was still Madras, people would tell in a jiffy that the tallest building in the whole city is the LIC building. The building came as a perfect amalgamation of creativity and urbanization. It was the beginning of an era for the rise of tall rise buildings in Chennai that provided state-of-the-art infrastructure.

Everyone admires Skyscrapers. Let’s rewind and walk through the journey of how and when did some of these famous Skyscrapers were made Chennai:

Inaugurated in the year 1959, it stood as the tallest building in India with 15-storeys. LIC building served as the headquarters for the Life Insurance Corporation of India. As soon as it was established, it became the most impressive building in the city. The building is located in Anna Salai. It was designed by two London-based architects H.J Brown and L.C Moulin and was later completed by L.M Chitale. This building was the first in Chennai to introduce a pile foundation for its construction and also the first to have electric elevators. One feature that elevates the building is the energy-saving design. The building has concrete walls on the eastern and western sides, and the north and south are fitted with glass windows. This was aimed at maintaining a stable temperature inside the building while providing excellent lighting. It is still awe-inspiring to see such a structure built nearly 60 years ago.

2. When Hyatt played its game!

For almost 35 years LIC stood as the tallest building in Chennai. Although Chennai saw several modernized architectures, it did not construct anything like LIC until the Hyatt Regency hotel took shape. The luxury hotel building is nearly 71 meters. They started the design of the building in 1986, and in 1989 the construction of the building commenced. First, the building was constructed by the Oberoi group and was halted as they stepped back. Then the construction of the 18-storeyed building was completed in the year 2011. After that, the building was acquired by the Saraf group, it was opened as Hyatt Regency. One of the main features of the building would be the sun-filled atrium. The hotel has almost 325 rooms in total along with several event rooms and convention Centre. Now, it stands as one of the best five-star luxury hotels in Chennai.

Between 2011 to 2015 two residential projects came into being by two of the real estate giants in Chennai. TVH Ouranya Bay Towers by True Value Homes is a residential complex whose roof is 105 meters high. It is a 30-storeyed building that is located in the OMR. During the time of its construction, it was said to be the tallest building in Chennai. Towers took very little time to complete; the construction started in 2008 and completed in 2013. The following year the 104-meter high Birchwood by the house of Hiranandani was conceived. It is a luxury residential apartment located in Egattur. Birchwood is one among a cluster of skyscrapers all by the House of Hiranandani.

Uruguayan architectural firm Carlos Ott designed the TCS Signature tower in Siruseri. The building itself is an aesthetically designed one with a tall tower rising to 102 meters. The Ariel view of the building resembles butterfly wings intertwined with a central spine. It can accommodate up to 30,000 employees and built with energy-efficient measures.

6. The tallest building in Chennai by SPR Highliving

The tallest building in Chennai as of today is the SPR Highliving District Tower – H – SPR city, located in Perambur. The architectural marvel rises to 161 meters. It is built across 63 acres of land and raises to 45 floors. The gated arena offers space for both residential and commercial purposes. It is an epitome of luxury with almost 60+ world-class amenities. The tower is still under construction.

Besides these, several skyscrapers have come up over some time. There are a lot more, under construction. Some of the dominant buildings are, Emami Tejomaya in OMR, which is 102 meters high; The Pinnacle Crest residential complex in Shollinganallur that is 104 meters high.

Numerous other buildings are under the approval phase; most of them are residential complexes. A survey done among the first time home buyers revealed that nearly 74% of them want to live in the top floors of luxury apartments and almost 59% want to buy their home in a landmark building. It wouldn’t be any surprise to see all upcoming buildings as Skyscrapers in Chennai.

Mention in the comments one building in Chennai that you had fall on your back just by trying to find the topmost floor!