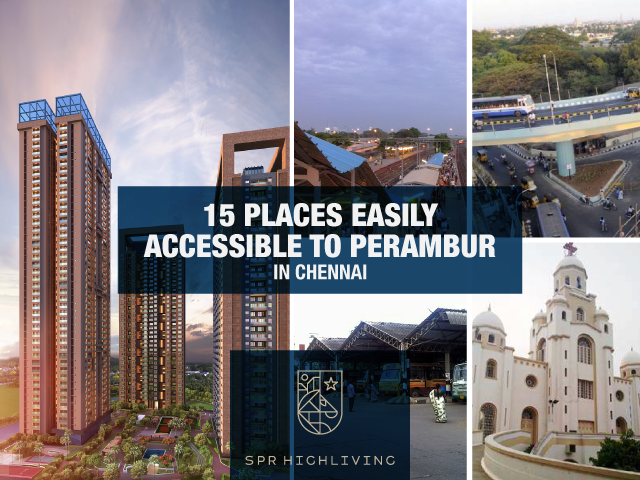 Perambur is a neighbourhood located in the northern region of the city of Chennai. This busy area is tucked away among several popular and prominent places. It is famous for many factors. The reason that Perambur is easily accessible to several other places in the city makes it a most sought after location for buying luxury apartments in Chennai.

Perambur is ensconced in a niche location inside the city, making it easily and conveniently accessible from several other neighbourhoods and places of importance. Being situated in a safe and secure zone free from natural as well as human-made disasters, Perambur ranks ahead when the quality of life in the city is concerned.

Even during the floods of 2015, this neighbourhood was unaffected and was functioning normally. There’s little wonder that the modern home buyers are attracted toward the flats for sale in Perambur.

Top 15 places that are easily accessible from Perambur:

The busy and fast-developing neighbourhood of Perambur is connected comfortably with multiple prominent places in the city. A few have been discussed below:

Koyambedu houses one of the largest fruits and vegetables markets in the state, as well as the city’s mofussil bus terminus. Located at 15km from Perambur, Koyambedu is just around 30 minutes of drive from Perambur. Another reason why people prefer to buy new apartments at Perambur Chennai.

Another prominent neighbourhood of the city that is in close vicinity to Perambur is Anna Nagar. Home to reputed educational institutions and health care facilities, Anna Nagar, is among the most expensive neighbourhoods in Chennai. With numerous commercial establishments, this place offers multiple benefits.

One of the oldest yet significant areas in Chennai city, Madhavaram is a zone in Greater Chennai Corporation famous for the Aavin Milk Society, one of the largest dairies in the nation. A visit to the Aavin milk processing unit is both educative and recreational.

The Madhavaram botanical garden, created over a massive area of 28 acres is a haven for recreation and morning walkers in North Chennai. Falling within 5km from Perambur, Madhavaram is easily accessible from Perambur too.

Thiruvanmiyur, one of the busiest places in Chennai, is 22 km away from Perambur, connected by the popular Anna Salai. Considered the gateway to the IT corridor, Thiruvanmiyur neighbourhood attracts people from different fields for various purposes. Being conveniently accessible to Thiruvanmiyur by road network makes flats for sale in Perambur highly in demand.

The most beautiful beach in the nation and the third-longest in the whole world, Marina Beach in Chennai is a major tourist attraction in India. It is 10 km from Perambur and takes only a short time by road. If you are considering investing in homes in the city, check out the flats for sale in Chennai Perambur.

Perambur enjoys the benefit of proximity to Retteri lake, a place where you may visit with the family on a short trip for spending time peacefully. Retteri Lake offers the opportunity to spot a variety of birds, do fishing, and a pebble-skate game on the shallow waters. Those with an artistic mind may sketch the beautiful, natural scenery while sitting on the breezy banks of the Retteri Lake.

Redhills is connected to Perambur by road. It is famous for the large scale paddy and rice business, as well as the Angalaparameswari temple. Filled with renowned temples and educational institutions, Redhills is one of the prominent neighbourhoods of Chennai that is in the vicinity of Perambur.

One of the most popular commercial and residential zones in the city, Egmore accommodates the famous Egmore Railway station, which is the terminus for all south-bound trains from the city. Prominent places such as the museum, acclaimed colleges, and hospitals are located in this area that is 10km from Perambur.

Perambur is connected to Tambaram, the famous southern suburb of Chennai, by NH 32 and NH 48. Considered the most significant approach zone to the city from all southern districts, Tambaram is renowned for varied commercial, residential, and social activities.

Mylapore is rich in cultural and commercial activities. It is one of the oldest residential neighbourhoods of Chennai and enjoys being located in the central part of the city. There are several attractions here, such as the famous Kapaleeswarar temple, Ramakrishna Matt, and endless traditional musical treats. If you are the conventional type, owning your luxury apartment in Perambur Chennai will enable you to visit Mylapore, which is just less than 10km away frequently.

This busy area almost always bustles with activity. Formerly a residential neighbourhood with a religious atmosphere, this locality is fast developing and providing multi-faceted opportunities. With popular restaurants, malls, and hospitals, this area is considered crucial for the city. Perambur is 12km from Vadapalani, making it fresh for apartment owners to commute up and down to Vadapalani easily.

Thiyagaraya Nagar, also known as T.Nagar, is a shopper’s paradise in Chennai. As it accommodates a large number of small to large commercial establishments, this place practically bubbles with activity most of the day. From petty stuff to goods worth lakhs, you can get everything here. This commercial hub is located within 10km from Perambur, just over 15 minutes drive.

The famous residential and shopping district of Purasaiwakkam is a mere 6km away from Perambur. It is considered a perfect mixture of residential and commercial zones, making it accessible among all types of the city population. Perambur residents can reach this locality in a jiffy, fulfil their shopping and recreational needs, and come back home within no time.

This northern boundary of the city never sleeps. Filled with several industries and having a noisy atmosphere, this place is among the oldest neighbourhoods of Chennai. It is the gateway to the neighbouring state of Andhra Pradesh. Being close to the Ennore port makes it unique. It is located at around 8km from Perambur.

The size and shape of the Chennai city keep changing. Are you considering buying a home here? Checking out apartments for sale in Perambur will be a sound idea. Perambur offers a few of the tallest residential buildings in Chennai.